Super Sevens for Android qualified for the Amazon Developer Select program earlier this year. If you purchase this app on Amazon, they give you 60 Amazon Coins in return. Thus, in effect, it’s like the app is 30% off.

So if you want to get a deal on Super Sevens for Android, act before Wednesday!

Here’s the notice from Amazon: “All apps qualifying for the Amazon Developer Select program prior to February 15, 2015 will continue to receive their mobile ad impressions, Amazon Coins, and AWS credits benefits through March 31, 2015.”

The latest version of Simple Sevens for iOS just got posted to the App Store!  Check out the new “Super Button” added to the title screen!

Pressing this button creates a random game with:

And this is just a small taste of some of the features in Super Sevens.  Check out the full version to play with up to 10 suits, a double deck, or a hearts-style survival mode!

(04/02/15 – UPDATE:  This promotion is now over.  You will no longer receive 60 Amazon Coins for downloading Super Sevens on the Amazon Appstore.  Thank you to the one person who bought it during this promotional period.  Did you like it?  Was it fun?  Did you tell all of your friends and family members about how awesome it is?  I guess your family doesn’t value your opinions.  That’s ok, thank you for trying.  It might just be that your family is more interested in “Hearts” than “Sevens”.  If that’s the case, you should totally let them know that there’s a new card game by ThumbSnail Studios out on the Amazon Appstore called “Super Hearts:  Double Deck Cancellation Chaos”.  It’s really fun, and I’m sure everyone you know will like it.  Hopefully they’ll listen to you this time.)

Note the new Achievement Button on the title screen!

Super Sevens for Android is also now integrated with Amazon GameCircle.  This allows for the following benefits:

-Whispersync for Games:  If you so desire, you can sync your data with the cloud and transfer your settings/stats over to another Android device.

-Achievements:  Whether you sign into GameCircle or not, Super Sevens now comes with 29 additional challenges to overcome!  Much like the game’s AI, these challenges range from very easy to very hard.  Can you beat them all?

Some of the Achievements to obtain in Super Sevens. (Oh yeah, I owned “The Casuals” in Double Deck mode.)

These new features are not limited to just Amazon phones and tablets but work on any Android device running at least Android 2.3.3.  However, to utilize Whispersync for games, you will need an Amazon account.  Achievements can be obtained and accessed with or without an Amazon account.  For those of you who opt to sign into GameCircle, you may be interested in Amazon’s GameCircle Terms of Use and Amazon’s Privacy Notice.

Simple Sevens for iOS Now Available on the App Store

Simple Sevens for iOS by Jeffrey Derrenberger (ThumbSnail Studios) is now available for download on the App Store for free!

Simple Sevens is the classic version of the card game “Sevens”.  Take the game for a spin, try out the easy controls (double tap or drag), and get a feel for the different difficulties (7 in total, ranging from very easy to very hard).  And then consider getting Super Sevens, “Sevens” to the extreme with all sorts of customization options (up to 10 different suits) and challenges (such as double deck mode). 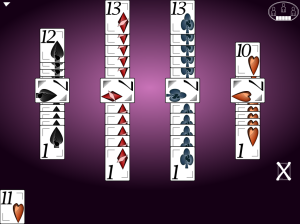 Simple Sevens requires at least iOS 5.1.1;  thus, any iPad, any iPhone 3GS or newer, and any 3rd generation iPod Touch or newer

Simple Sevens for Android Exclusively on the Amazon Appstore

First of all, for those who happened to look at Simple Seven’s Amazon page the first day it went live… Simple Sevens is definitely NOT rated “Mature”.  That was some weird glitch that has since been fixed.  I mean, yes, the seven of diamonds logo is sexy, but it ain’t that sexy.  Anyways…

Simple Sevens by Jeffrey Derrenberger (ThumbSnail Studios) is now available for Android exclusively at the Amazon Appstore for free!

Simple Sevens is the classic version of the card game “Sevens”, a card game particularly great for kids.  But Simple Sevens can be fun for adults, too.  Play against The Friendly for a relaxing game, or take on The Merciless for more of a challenge.

Simple Sevens can also be thought of as the Lite version of Super Sevens.  In fact, there’s even an Easter Egg in Simple Sevens where you can try out one of the game types from Super Sevens.  Click on the ThumbSnail on the Title Screen.  Then click on the ThumbSnail on the About Screen.  This will let you play a game with 6 suits, 5 players, and an 8 as the midpoint.  The AI type is randomly chosen to be Casual or higher.

Super Sevens for iOS just upgraded to version 1.1 on the App Store!  The main difference in this version is that it includes 64-bit support.  No, unfortunately, this does not mean that it now runs on the Nintendo 64.  However, it does meet Apple’s new requirements for 2015.

Here are the other changes in this version:

– Fixed a minor bug that no one would have ever seen or noticed.  However, I noticed it.  And it bugged me.  So I fixed it.

Super Sevens for Android Shuffled into the Amazon Appstore

Super Sevens by Jeffrey Derrenberger (ThumbSnail Studios) is now available for Android exclusively at the Amazon Appstore for $1.99!

But wait, isn’t Sevens just a fun and simple game for kids?  Well, that’s true.  It’s a card game based on building a sequence up or down the seven of a suit.  It’s a great way to teach young children how to count.  But counting up from 7 to 13 or down from 7 to 1 isn’t exactly exciting math.  And certainly not the kind of math that would lead to so many sevens. 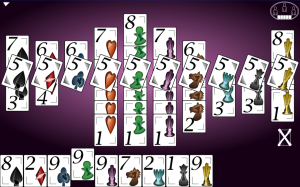 Sequence:  You can, of course, still play with a 7 as your midpoint card for the standard ace through king game.  Or you can play with a midpoint as low as 2 or as high as 10 (for ace through 19).  That’s 9 more different game types.  9 choices for the midpoint x 9 choices for the number of suits yields 81 different game types.  So now we’re using multiplication.

Hearts-Style:  But 9^3 is a long way away from 7^7.  That’s alright, though, because Super Sevens also includes the option of playing in Hearts-Style, a mode where you try to survive several rounds of Sevens while having fewer passes than your opponents.  This toggle option means we have 729 x 2 = 1,458 game types.

Double Deck:  You can also face an entirely different strategy by playing with a double deck.  This option is available for games with 2 to 5 suits.  Thus… Uh oh, now we’re on to permutations with repetition allowed!  4 possible choices for suits x 9 choices for the midpoint x 9 choices for the number of players is 324.  The total is now 1,782.

Double Deck Hearts-Style:  And for the greatest challenge of them all, you can play in Hearts-Style mode while using a double deck!  So that’s another 324, bringing the total to 2,106.

7 Different A.I. Difficulties:  The computer opponents in this app can have one of 7 personality types, ranging from “The Friendly” to “The Merciless,” depending on whether you feel like playing a more relaxed game or a more challenging one.  You can set all of your opponents to one personality type, or you can set each opponent individually to whatever personality you choose.

Now, admittedly, this is beyond my mathematical ability, and I can’t wrap my brain around how to answer this.  However, the equation for a combination with repetition (scrolling down to the bottom of that page) appears to be:  (n + r – 1)! / r! * (n – 1) !, where n is the number of things to choose from and r is how many we choose.  And now we’re using factorials!

I have no idea how to calculate this for every possible game type in Super Sevens.  However, let’s just look at the number of combinations for a single game type:  a game with 10 suits, 10 as the midpoint, and 10 players.  The variable r is 9 since we are selecting the personality for a total of 9 opponents.  The variable n is 8 (since there are 7 possible AI personalities plus we can also play against another type of opponent:  a human in the same room on the same mobile device).  Plugging those values in, we get: 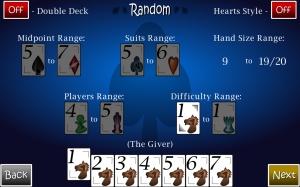 Whew, wow, thank goodness there’s Random mode where the game can just decide all of this stuff for me.  My brain hurts.  Tonight, I’m playing on easy!